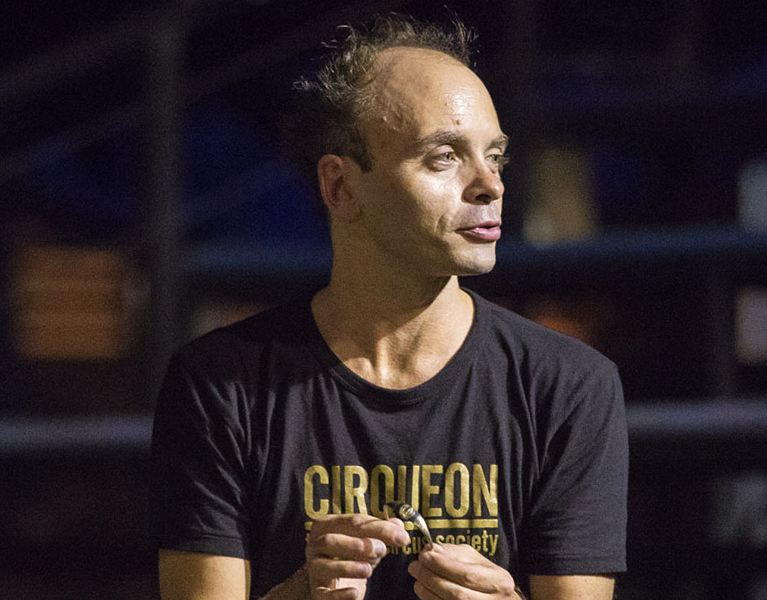 Roberto Magro, has worked as an artist, dramaturge, teacher and circus director in various countries. He trained at the Académie Fratellini, and was part of Les Oiseaux Fous with whom he travelled around Europe before founding his own company, Rital Brocante. His high affinity for transmission and reflection led him to become artistic director of Flic Circus School in Turin between 2005 and 2011. He found a balance between his work as a pedagogue and his role as a dramaturge and a director for many artists and companies. He created Era, Sonnet for a clown with the company MagdaClan and he has been part several artistic projects, with Roberto Olivan, circus company “eia”, Psirc, Forman Brothers, Nos no Bambu, Circo no Ato and many others. He is the instigator of Festival Brocante and he settled in Barcelona in 2013 to take the artistic direction of La Central del Circ for two years. At the end of his term, he continued the road and his work as a creator and a pedagogue.

Workshop: Circus and dance acting and the sense of metaphor

A method to develop the creativity of writing in contemporary circus and dance Using training exercises and stage experiences, we are going to explore the factors that generate stage presence (rhythm, space, body lines, levels, dimensions and textures) and the practice of the construction of stage works, starting from a main idea or a concept.

Development of the dramatic action and circus and dance as a language, building understanding of dramatic metaphor and its relationship with the sense of stage movement.