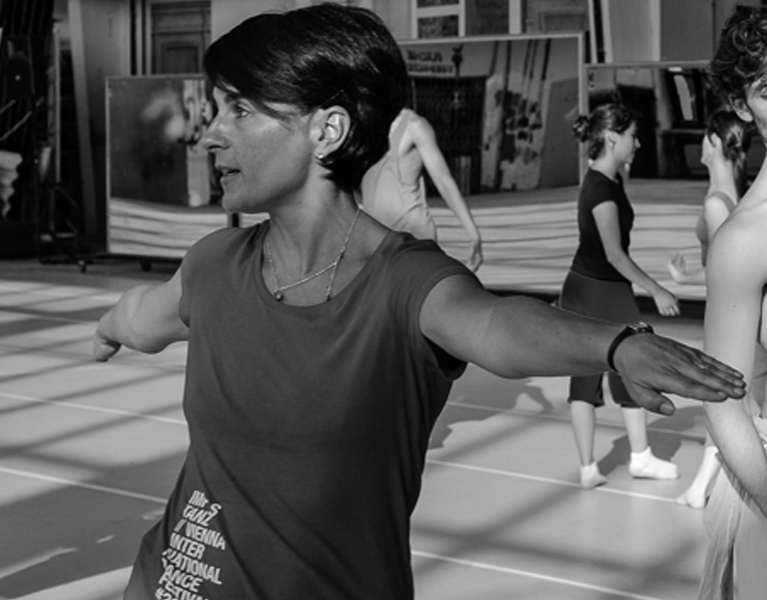 from 22nd of April till the 3rd of May

Marta Coronado, studied dance at the Official School of Dance of the Government of Navarra and works as a dancer at the Yauzkari company, José Lainez. She finished her studies at P.A.R.T.S. and after she begins to work for Rosas company of Anne Teresa De Keersmaeker. Since 1998 she dances in: Drumming, I said I, In real time, Rain, April me, Bitches Brew, Kassandra, Rain Raga D ‘a soir a jour, Mozart concert Arias, Steve Right evening. In 2002, she receives the BESSIE award (New York Dance and Performance Award). In 2008, she began her career as co-director of the repertoire of Rosas at the school P.A.R.T.S. From 2011, she co-directs the pieces of repertoire of Rosas in The Opera of Lyon and the Opera of Paris as a rehearsal director, roll that she is still keep on doing. She teaches at PARTS, Amsterdam Theater School, Deltebre Festival, Impulstanz Vienna, La Raffinerie and at companies: Ultima Vez / Wim Vandekeybus, Cie Thor / Thierry Smits, Marseille National Ballet, Rosas, Les ballets C de la B and others. Her choreographic work begins in 2009 and she is invited to create at La Salle Singapore, Fueradeleje and Dantzaz Konpainia. In 2011, she co-created the collective House of Bertha and In 2013, she forms part of the PHD project in one night. She is currently a guest choreographer at La Monnaie Opera for Opera Orfeo and Manjun and choreographer assistant for the re-take of West Side Story on Broadway New York.

After working more than a decade with and for the same choreographer I realized that I had to challenge and reinvent myself each time we would be involved in the creation of a new piece.

If we visualize the creation of a dance piece as a puzzle, and as a dancer you would like to be an active piece on the board, you need to be a thinking body that changes, transforms, translate the basic dance material. We will deal with Space and Time alterations. The first few days we will learn a basic phrase that will be the vocabulary used to build all the changes. Are we able to play with suspensions, to freeze the time on stage? Do we dare to make radical change of speeds and create endless loops that bring our dancing to other quality levels?

The final goal of the workshop is to share the base of my own experience as a dancer and give different guides and suggestions to the participants of when and how to use these principles of transformation and composition.